Four Things To Keep In Mind Before Launching Your PR Campaign 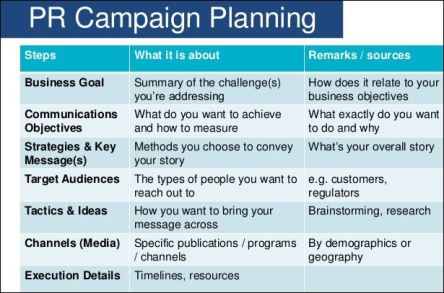 The planning practice of public relations is fairly straightforward.

It is therefore not without reason PR is referred to as “earned media”.

It’s for a very simple reason: one seeks to strategically gain media visibility by conceiving of creative story ideas or “hooks” that effectively entice members of the media enough to cover them.

Thus, “earning” both free media, as well as the trust of the reporter or producer, can potentially lead to one procuring even more “real estate” in the media outlet in the future.

This is in contrast to “paid” media, which is often referred to as simply advertising.

Public Relation and its power to shape the public’s perception and build platforms of influence, credibility and prominence is unique.

PR is often not used as this unique instrument, as it really is,  to obtain sustaining positive attention to your company and its services and products. Mainly as consequences from PR used as an instrument, to mislead the public perception in many areas of interest, which makes you loose peoples trust to your company, when revealed – you deliberately were misleading them.

Never deliberately mislead people working in the public national and local media. They remember you have made them look like fools, while they were trusting you, and that’s not forgiven easily.

The primary misconception about PR is that it is a direct lead for sales generation and a guaranteed source of revenue, but this is not the case.

In fact PR has so much more value for your company, when PR is  used with sincerity and honesty.

A meticulously planned out and successfully executed public relations campaign is actually an investment in the long-term prosperity of a brand — with a healthy dose of patience, of course.

Here are four things you should keep in mind when planning a PR campaign.

Although consistent press coverage produced through successful PR efforts does often end up positively impacting profitability and sales lead generation, it is not meant to function simply as a means to do so. Instead, it is fundamentally intended to produce a higher level of awareness, trust and elevate the positioning of a brand.

Hence, PR can positively influence and enhance one’s industry credibility, but in any long-term PR strategy, consistency is the key.

2. Don’t Rage Against the Machine, Oil It

PR is a critical mechanism for creating success for your brand, but not the sole one.

If you are releasing a new product, PR can absolutely generate awareness of that product. But if you do not have a proper distribution strategy in place, your prospective consumers will have a difficult time locating it. This will spoil and squander any benefit achieved through the press coverage attained.

If you do not implement a solid marketing strategy, you will lessen the impact created by your public relations strategy.

It all works together in sync … “One hand washes the other and together they wash the face”.

When you kick off your PR campaign try not to keep shifting your entire strategy, expectations or goals — or worse, halt your campaign altogether.

If you start off by committing to a certain scale and scope of press coverage, and you find that this coverage isn’t immediately yielding the sales figures or leads you were hoping for, or the campaign isn’t instantly producing the exposure you originally sought, don’t keep moving around in your overall objectives. Doing so not only tells people that you don’t understand your message or your audience, but it also creates a dangerous stop/start momentum, which can be detrimental to your campaign’s success.

4. Be Enthusiastic and Yet Objective

We all think our “baby” is the most beautiful, the most talented, and the most special.

It’s easy to feel that you have the best product on the market, but keep in mind that not everyone will always agree.

Even the most popular brands have a hearty serving of naysayers.

Your story may be the best thing since sliced bread – to one level of media – but to another, it may fall on deaf ears.

Shooting for the moon is fantastic, but if you are expecting to get there in an airplane, you may want to scale back your expectations.

Remember, if you begin your PR campaign with an open mind, clear-cut goals and realistic expectations, your success is much more guaranteed.